HomeBlogNewsOn the Anniversary of the Olmstead Decision, take action to support options in the community

On the Anniversary of the Olmstead Decision, take action to support options in the community

Though the Olmstead Ruling was a victory, not all states complied with the decision. In Illinois, three lawsuits were filed against the State of Illinois for its failure to implement Olmstead and give people with disabilities options in the community.  Illinois, and states around the country, has made progress, but legislation is still needed in order to support the implementation and enforcement of the legal decision and the Americans with Disabilities Act integration mandate, which says that services need to be provided in the least restrictive setting.

Today, June 22, on the 19th Anniversary of the Olmstead Decision, the disability community around the country is calling on Congress to support the “Empower Care Act.”  The Empower Care Act would reauthorize a program called “Money Follows the Person,” which between 2007 and 2016, “supported over 75,000 people with disabilities and seniors to move out of nursing homes and into the community nationwide, (from Access Living Action Alert on June 22, 2018).”

Below please find information from the National Council on Independent Living about action you can take to support the Empower Care Act.

Take Action for MFP on the Olmstead Anniversary!

This Thursday, June 22, 2018, is the 19th Anniversary of the Supreme Court’s Olmstead decision cementing the ADA’s integration mandate. To commemorate the day, NCIL is joining other national disability organizations in hosting a National Call-In Day for the EMPOWER Care Act (S. 2227 and H.R. 5306).

Since Money Follows the Person (MFP) began in 2005, over 75,000 disabled people have been liberated from institutions, and CILs have played a critical role in that. But MFP expired on September 30, 2016, and states are starting to scale back and end their programs. In fact, last year was the first time the number of people transitioned into the community declined. We need your advocacy to get the House and Senate to pass the EMPOWER Care Act to reauthorize and fund MFP!

Congress must save and fund MFP, and they need to hear from us! Please urge your Senators and Representative to continue the Money Follows the Person program by co-sponsoring the EMPOWER Care Act! 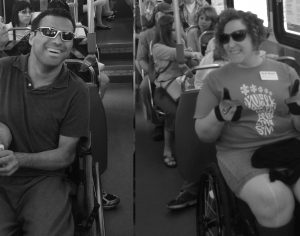 WHAT NOW? A TRANSPORTATION WORKSHOP 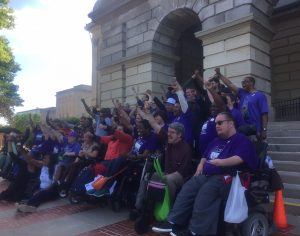