HomeBlogNews“Advocacy is my passion” — An Interview with Linda Marek 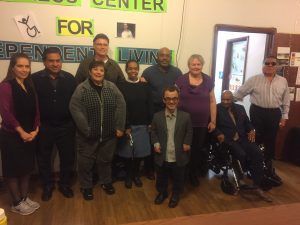 “Advocacy is my passion” — An Interview with Linda Marek

Advocacy continued outside of the institution. In 2007, she moved to Franklin Park, where she wound up with a landlord who didn’t respond to building issues. The landlord “wasn’t doing repairs,” Marek explained. “I took the landlord to court.”  She won.

Marek was re-introduced to Progress Center several years ago.  In 2012, during a visit to a mental health center in Franklin Park, she saw a flyer about a legislative training at Progress Center.  She joined the class, which was led by Advocacy Coordinator Larry Biondi. “She’s a firecracker,” Biondi said, who refers to Marek as Progress Center’s Public Relations Advocate.

Following the legislative training, Marek signed up for an internship at Progress Center, then joined the Membership and Outreach Committee. On the committee, she served as secretary for three years. According to Marek, her tenure as secretary was good preparation for service on the Board of Directors.  At her first full board meeting, she was appointed “Reporting Secretary.”

In addition to her service on board and committees, Marek got involved in outreach and advocacy efforts, speaking about Progress Center at churches, and participating in actions. In 2015, she protested at Northwestern University, when advocates rebelled against a speaking engagement by Peter Singer, a bioethicist who has argued that severely disabled babies should be killed.

Marek also invited Biondi and Progress Center’s Clark Craig to present at a mental health centers, where they spoke about advocacy issues.  For Marek, spreading the word about disability supports at places like mental health centers is important, especially now.  “People have been going to psychiatric hospital wards more often because they are worried about losing benefits, losing houses,” Marek said.  “They should do something about it.”

Marek has always been one to ‘do something about it,’ but Progress Center has helped when she needed it. “They’ve supported me so much,” Marek said, referring to Progress Center. “I had trouble making decisions on my own. Now I do better.”

In addition to outreach at Mental Health Centers, Marek has also presented about disability issue and Progress Center at town hall meetings, churches, and legislative offices.

Because of Marek, Progress Center is also doing better. In the midst of the Illinois State Budget Impasse, she helped with fundraising, selling Avon Products and stuffed animals, with a percentage of the sales going to Progress Center. “We reciprocate,” Marek said.  “We hold each other up.” This holiday season, she is selling a stuffed animal, a lion named Rory.  “Rory,” Marek says, “Get it?”  Everywhere she has been, and everything she has done, Marek has made a difference for herself, Progress Center and other people with disabilities. It’s hard miss her ROAR!.